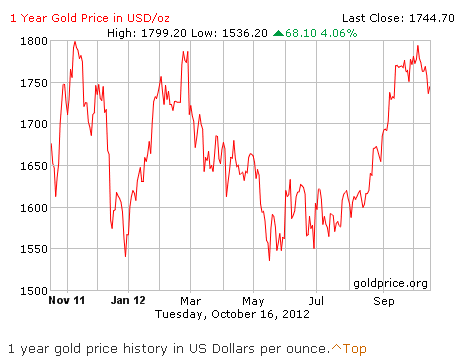 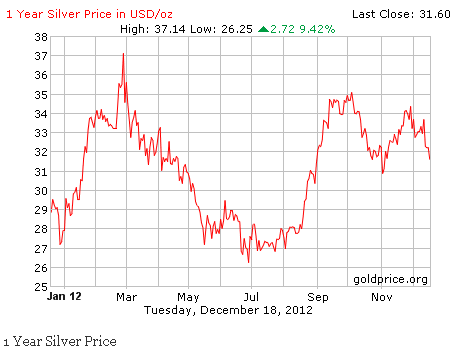 The bank looks for the yellow metal to average $1,950 next year, buoyed by central banks through both loose monetary policy of some and buying of the metal for reserves by others. The other more industrially oriented metals should also strengthen, said Commerzbank, listing full-year forecasts of $40 for silver, $1,875 for platinum and $855 for palladium.

“2013 is likely to see precious metal prices climbing further or indeed resuming their upswing,” Commerzbank said. “The ultra-loose monetary policy pursued by the central banks coupled with (geo)political risks should ensure that gold remains in demand as a store of value and safe haven. Silver can be expected to profit as industrial demand picks up. Platinum will find support as supply decreases in South Africa, while palladium will be boosted by lower supply from Russia and robust demand from the automotive industry.”

In the case of gold, one headwind during 2012 is expected to abate next year, the bank said. Analysts look for Indian buyers, who were less active this year, to become accustomed to higher prices brought about by factors such as increased duties on gold imports and a weak rupee. Also, the monsoon season is not likely to be as poor as this year, meaning more income and thus gold demand from rural areas, Commerzbank suggested. Improved economic prospects in China, another key consumer, should support demand there.

“Investment demand should profit further from the low and negative real interest rates, for the leading central banks will continue to pursue their ultra-loose monetary policy in 2013 in a bid to shore up the economy and stabilize the financial markets,” Commerzbank said. Central banks likely will be net buyers for the fourth straight year in 2013, since gold still accounts for a small proportion of currency reserves for emerging economies, Commerzbank said.

Gold-mine output should rise, but the main noticeable production growth will be in countries where demand will also increase sharply, such as China and Russia, Commerzbank said. As a result, supply from these countries is unlikely to reach the global market.

“All in all, we are confident that the gold price will achieve – and indeed exceed, at least temporarily – the $2,000 per troy ounce mark next year,” Commerzbank said.

Turning to silver, Commerzbank said the automotive industry in particular is set to contribute to demand growth. Auto production is expected to expand, and cars use silver for electronic components. An improving economy is also likely to mean more demand from the housing and construction sectors, the bank said.

“We are convinced that silver will once again exceed the $40 per troy ounce mark in 2013,” the bank said.

Meanwhile, Commerzbank said a widely followed Johnson Matthey report issued earlier this month does not look for any fundamental change to the supply/demand picture next year. Johnson Matthey forecast a supply deficit this year and next.

“The strikes in South Africa are likely to have a long-lasting impact, and may even flare up again if low prices and higher costs result in mine closures and mass redundancies,” Commerzbank said. “At the same time, demand from the automotive industry and other industrial applications is expected to recover. This points to a further year of deficits, which should be reflected in higher prices. We expect platinum to exceed the $1,900 per troy ounce mark by year’s end 2013.”

Palladium is also forecast by Johnson Matthey to be in a supply deficit in both 2012 and 2013.

“Supply is likely to fall further, mainly as a result of lower Russian sales,” Commerzbank said. “At the same time, demand from the automotive industry is likely to remain robust, so another year of supply deficit appears inevitable. We see considerable upside potential for palladium and foresee a price of $950 per troy ounce by year’s end 2013.”