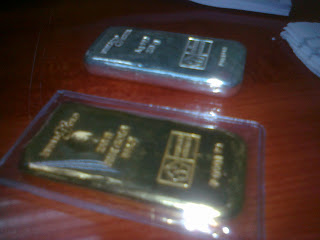 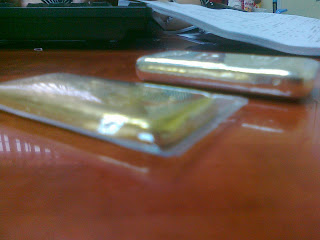 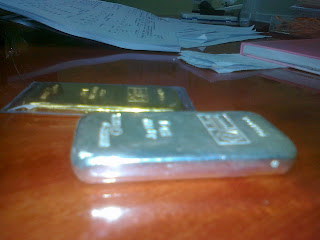 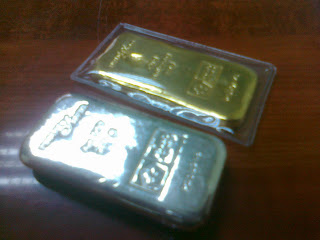 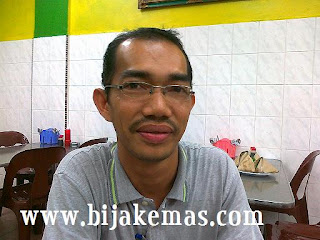 Gold bars are displayed at Tanaka Kikinzoku Jewelry K. K.'s store in Tokyo. Photographer: Junko Kimura/Bloomberg
Gold approached $1,570 an ounce, extending a rally to a record, on bets that the dollar will extend a slump, enhancing the allure of the metal as a store of value. Silver posted for the biggest monthly gain in 28 years.
The greenback headed for the fifth consecutive monthly decline against a basket of six major currencies. The Federal Reservesignaled this week that borrowing costs will remain at a record low for an extended period. Gold capped the biggest monthly gain since November 2009.
“The dollar will continue to lose ground for the foreseeable future, so it only makes sense to be invested in precious metals,” said Matthew Zeman, a strategist at Kingsview Financial inChicago.
Gold futures for June delivery rose $25.20, or 1.6 percent, to settle at $1,556.40 at 1:42 p.m. on the Comex in New York, the biggest gain since Jan. 28. After the settlement, the metal reached a record $1,569.80. The price surged 8.1 percent in April and advanced 3.5 percent this week, the most since February 2010.
Gold for immediate delivery climbed as much as 2.2 percent to an all-time high of $1,569.32.
Assets in the SPDR Gold Trust, the biggest exchange-traded fund backed by gold, have expanded 1.5 percent this month, heading for the biggest gain since August.
“The sinking dollar is driving people to the gold market,” said Lim Han Jo, a Seoul-based trader at Tongyang Futures Co.
The Fed has kept its benchmark lending rate at zero percent to 0.25 percent since December 2008 to stimulate the economy.

“The free-money party is going to continue, and that’s going to drive gold higher,” Zeman of Kingsview said.
Silver futures for July delivery rose $1.058, or 2.2 percent, to $48.599 an ounce. This month, the metal gained 28 percent, the most since January 1983.
The minimum amount of cash that traders must deposit for speculative positions in silver futures will rise 13 percent to $14,513 per contract after the close of business today, CME Group Inc., the Comex parent, said yesterday. Margins were $4,250 a year ago.
“Silver’s run is related to the rise in gold,” said Michael Cuggino, who helps manage about $12 billion at Permanent Portfolio Funds in San Francisco. “There’s a lot of speculation in silver. Anytime you’ve had a run like silver, you’re going to get a correction.”
Gold has climbed 33 percent in the past year, and silver has more than doubled.
Palladium futures for June delivery rose $16.85, or 2.2 percent, to $792.15 an ounce on the New York Mercantile Exchange. The price has climbed 44 percent in the past year.
Platinum futures for July delivery climbed $25.60, or 1.4 percent, to $1,865.50 an ounce. The metal has gained 7.6 percent in the past 12 months.
In April, palladium rose 3.2 percent and platinum gained 4.6 percent.
Source: www.bloomberg.com
Posted by Admin Bijak Emas at Ahad, Mei 01, 2011