Gold Buying will surely accelerate in the US as American's see the Euro price soar...AMERICANS are finally waking up, writes Matt Badiali for Steve Sjuggerud's Daily Wealth.And the story behind this chart is the alarm clock: 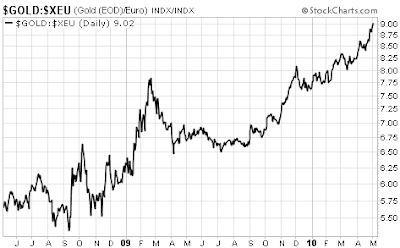 It shows the amazing all-time high just reached by Gold in terms of the pan-European currency, the Euro.You see, gold has been in a bull market for nine years now. But despite this price strength - and the reasons behind it - the average American has no idea this bull market exists. He has no idea what role Gold serves or why anyone would want some, other than to buy the wife a birthday present.He has no idea that huge money managers - like the central banks of China and India... and legendary fund manager John Paulson (who controls more than $30 billion of assets) - are accumulating huge amounts of gold.The chart above is why... and it's starting to wake people up. Western governments, including those in Great Britain, Italy, Greece, and the United States, have promised ridiculous benefits programs to their citizens... and they've taken on crushing debt loads. As you read this letter, those debt loads are ripping apart the Euro currency union, which began in 1999.Your typical American can't even find India on a map. He believes the Chinese are evil job-stealers. He doesn't give a hoot what happens in South America. But he does read the newspaper... and he has seen that Europe is in the middle of a giant crisis.Our typical American has also read that his country is in a similar situation. He sees runaway government spending. And now, with gold approaching a bull-market high in Dollar terms... and sitting at a new high in Euro terms, he actually sees the result: a flight from paper currencies into real money, Gold.This flight has sent gold from $1,100 an ounce to $1,180 in just the past month. I believe this rise is driven by the mountain of money controlled by central banks and large institutional investors.India, for example, made major headlines last year when it bought 200 tonnes of gold to diversify its currency reserves. China has more than doubled its gold holdings since 2003. It's also one of the largest owners of the big gold trust fund, GLD. John Paulson, one of the world's biggest and best money managers, owns more than $3 billion of that same ETF fund. He also owns more than $1.5 billion worth of gold miner AngloGold Ashanti... and several other huge mining positions.Money is flowing into Gold because big money managers know they shouldn't park their money in the Euro anymore. It's a piece of garbage. And Obama & Co. are promising free lunches to everyone who can help reelect them... This is harmful to the US Dollar's long-term value.Gold is now reasserting itself as a viable place to park wealth. After all, with interest rates so low, you're not missing out on fat interest payments by owning gold, which pays no interest. The Western debt problems will take a long time to play out. I believe they could send gold to $2,000... even $3,000 an ounce in the coming years.Would I like to Buy Gold at cheaper levels than $1,180? Sure. If you've been reading DailyWealth for a while, you probably have. But if you haven't yet, don't worry. You still have a huge tailwind at your back.As shown by the new ALL-TIME high gold just reached versus the Euro, the world is finally waking up to the paper currency crisis...and folks will continue to Buy Gold worldwide.
Source: http://goldnews.bullionvault.com/america_gold_050620103